I have finally finished my second year of college. Now that finals are over, I can post about some of the things I have been working on. First, a front-end I made with a group in my SWE 205 : Software Usability Analysis and Design class. The assignment was to create a homepage for the University’s bookstore website, applying all of the usability principles we had learned over the semester. I ended up working on it when I wanted to procrastinate on assignments in my other classes, so I put quite a bit of effort into it. 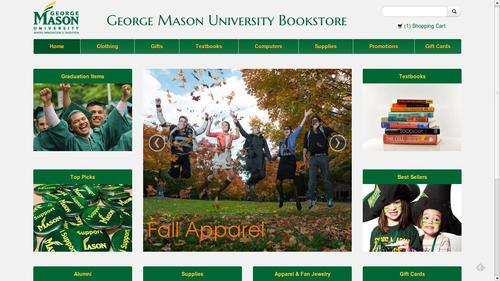 You can see all the code for it up on my GitHub.

Our group researched other university bookstore websites to get some ideas and we liked the layout of Virginia Tech’s (but hated the colors). We liked how everything needed was presented immediately upfront in a Windows 8 metro-esque grid.

Since the main feature of the site was a grid and I was already familiar with it I used Twitter Bootstrap to help with the CSS. Bootstrap also helped make the design responsive and look nice on mobile phones (try resizing your window to see it in action). I also used the Bootstrap modal for the “Contact Us” form which is activated by the link in the footer of the page. However, I had to modify it quite a bit to make sure it was fully usable and would prompt the user before they closed out of the modal with text entered.

Overall, this was a fun project to end off a very fun and interesting course. I highly recommend any one at GMU to take this course with Prof. Offutt even if they don’t plan on being web designers. I have come away from the class with not only the principles for making usable web interfaces but also a habit of analyzing nearly any interface in the real-world.

For example, I noticed the other day while getting food in the Johnson Center that they had installed a new paper-less straw dispenser. When I first encountered it, I didn’t know how to operate it (and at the time there was no sign to tell me how). Since there seemed to be a chute at the bottom of the contraption, I figured there must be a way to get a straw to drop down into it, but the dispenser didn’t give any hints to how to do that. The knobs on the side had looked purely decorative to me. Giving up, I opened the top of the dispenser and grabed a straw from the pile of them, cursing the whole thing for it’s bad usability.

The next day I came by for food again, and I noticed that it now had a sign instructing everyone to not do exactly what I had done the other day: “Do Not Open. Just turn knob”. More people than just I must have been perplexed by this dispenser. As Offutt had said countless times in class before: if a interface requires a manual then it has failed.

It’s the little things, like the straw dispensers that no one knows how to use, that you begin to notice after taking SWE 205. It’s both a blessing and curse. Bad interfaces drive me insane, and to my frustration I notice them everywhere now. But, at least know the most basic things to avoid in the interfaces I design now.