I tend to use Linux (Ubuntu) on my desktop late at night in a dark room. To protect my eyes from the blinding light of my monitors I’ve tooled my desktop environment over the course of a few months to be as dark as possible. It has gotten complex enough that I thought it would be worth sharing now.

Before I begin, I want to note that all the configuration for the setup I’m describing is stored in a dotfiles repo on my github profile. If you would like to replicate any of this setup, I would go there. Just note that I will probably be updating the master branch fairly often, but the midnight branch will always contain the setup described here.

Inspired by /r/unixporn, I decided to switch from gnome to bspwm, a minimal tiling window manager that positions windows like leaves on a binary tree.

I don’t really use the tiling features that often, though. I often do most of my work in the terminal and tmux does the terminal pane management. But, when I do open another application, it’s nice that bspwm forces it to use the maximum available space.

I also like how hackable the whole manager is. There is a terminal command bspc that controls the entire desktop environment and a separate program sxhkd (probably the hardest program name ever to remember) handles all of the hotkeys for the environment. All of them are stored in a sxhkdrc under the home directory and it’s super easy to add my own. The hotkeys make this superior to gnome for me because I never have to touch my mouse to move around the desktop.

I still love some of the features from gnome. Especially the text hinting, which is why I still run gnome-settings-daemon in my bspwm startup script.

To make gtk applications universally dark (and also to tune text hinting) install the gnome-tweak-tool. There should be a “Global Dark Theme” setting under the “Appearance” tab that can be enabled. I use the Numix gtk theme which seems to behave fine with this setting.

I’ve tried using a few other lighter-weight terminals like xterm, but I still like the features of gnome-terminal more. I created a “bspwm” profile and set the background to be transparent with opacity at about half-way on the slider. My background, set in the bspwm startup script is a subtle dark tiling pattern so this effectively makes the background of the terminal dark.

In my sxhkdrc I can then map my hotkeys for starting a new terminal to the command gnome-terminal --window-with-profile=bspwm.

Making vim dark is pretty easy. Just put this in the .vimrc:

I use the colorscheme distinguished which is installed by putting the distinguished.vim file under ~/.vim/colors/ and adding this to the .vimrc:

I like the abstraction that byobu puts ontop of tmux, so that’s what I use in the terminal. Colors can be configured by editing the ~/.byobu/color.tmux file. This is what I have in mine:

I tell my browser, firefox, to open pdfs in evince (aka. Document Viewer) because evince can darken pdfs.

Select View > Invert Colors and then Edit > Save Current Settings as Default and now most pdfs will be displayed as white text on black background.

Gimp allows you to change themes easily. Gimp GTK2 Photoshop CS6 Theme is my favorite dark theme. Put that in ~/.gimp-2.8/themes/ (or whichever gimp version is installed) and, in Gimp, change the theme at Edit > Preferences > Theme.

I had to hack firefox a lot to get it to be universally dark since the web (unfortunately!) doesn’t have a night mode switch. I’m using firefox instead of chrome because firefox has better customization for doing something this extreme.

Firefox has a really neat addon called Stylish that allows you to install and edit user CSS files to change the style of any website you visit. A lot of popular websites have dark themes on userstyles.org, but the rest of the internet still mostly has a white background by default.

However, since the theme is global, it overwrites the custom tailored dark themes that I had installed for specific popular sites (listed below) making the sites ugly. The Midnight Surfing Alternative theme can be edited through the Stylish extension to exclude the websites that I already have dark themes for. This superuser question explains what to edit. Now, whenever I add a new dark theme to Stylish, I edit the regex to add the domains it covers to the parenthesized list that is delimited by pipes.

Here is the list of dark themes I’m currently using with Stylish in addition to Midnight Surfing Alternative:

Most of my firefox UI is styled dark with the FT DeepDark theme.

The firefox developer tools can be themed dark in its settings.

For reddit, I use the RES addon which has a night mode option.

I also use Custom New Tab combined with homepage.py to display a list of my favorite websites when I start a new tab.

Vimperator allows me to control firefox completely with my keyboard which is really useful when I am switching back and forth between firefox and vim. By default, the vimperator window has a white background, so I had to set it to a dark theme. Also, in order to make all of the vimperator help pages dark, I had to add the protocol liberator:// to the regex for Midnight Surfing Alternative (exact syntax for that above).

At night, it’s also useful to filter out blue light to help with sleep. Redshift is a utility that does this automatically while running in the background. 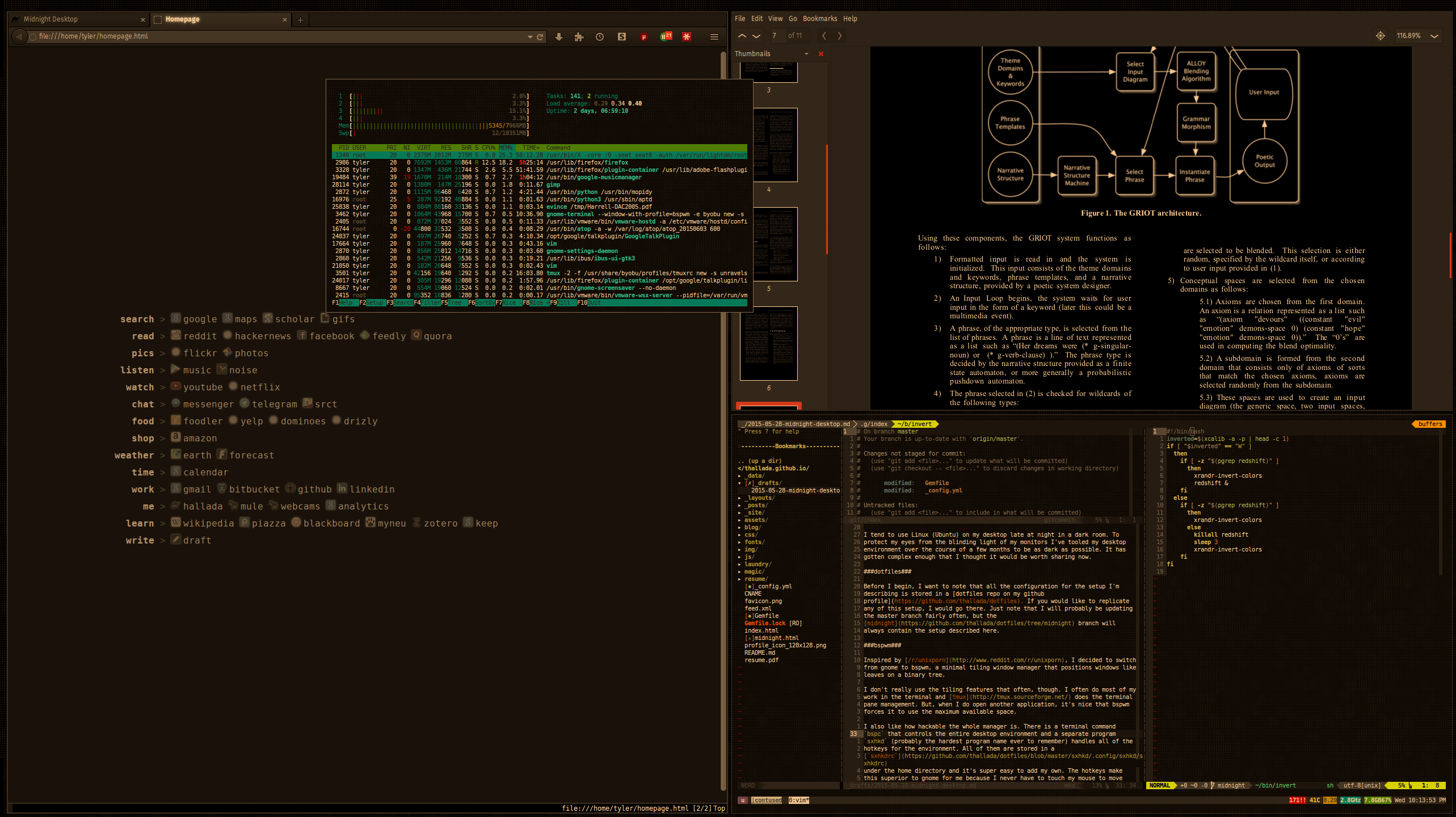 I noticed that with the dark colors and my monitor brightness turned low, it was hard to see the screen during the day because of glares. An easy solution to this is to simply invert the colors on the output of the monitor into an instant day theme.

I would have used the command xcalib -a -i but that would only work on one monitor and I have two. Luckily, someone made a utility that would invert colors on more than one monitor called xrandr-invert-colors.

The only problem was that this utility seemed to interfere with redshift, so I made a script that would disable redshift before inverting.

And, now I have a shortcut to invert the screen.

However, images and videos look pretty ugly inverted. VLC has a setting under Tools > Effects and Filters > Video Effects > Colors called Negate colors that can fix that.

For firefox, I made a global userstyle to invert images and videos.

Whenever I invert the colors, I enable that global theme on firefox. 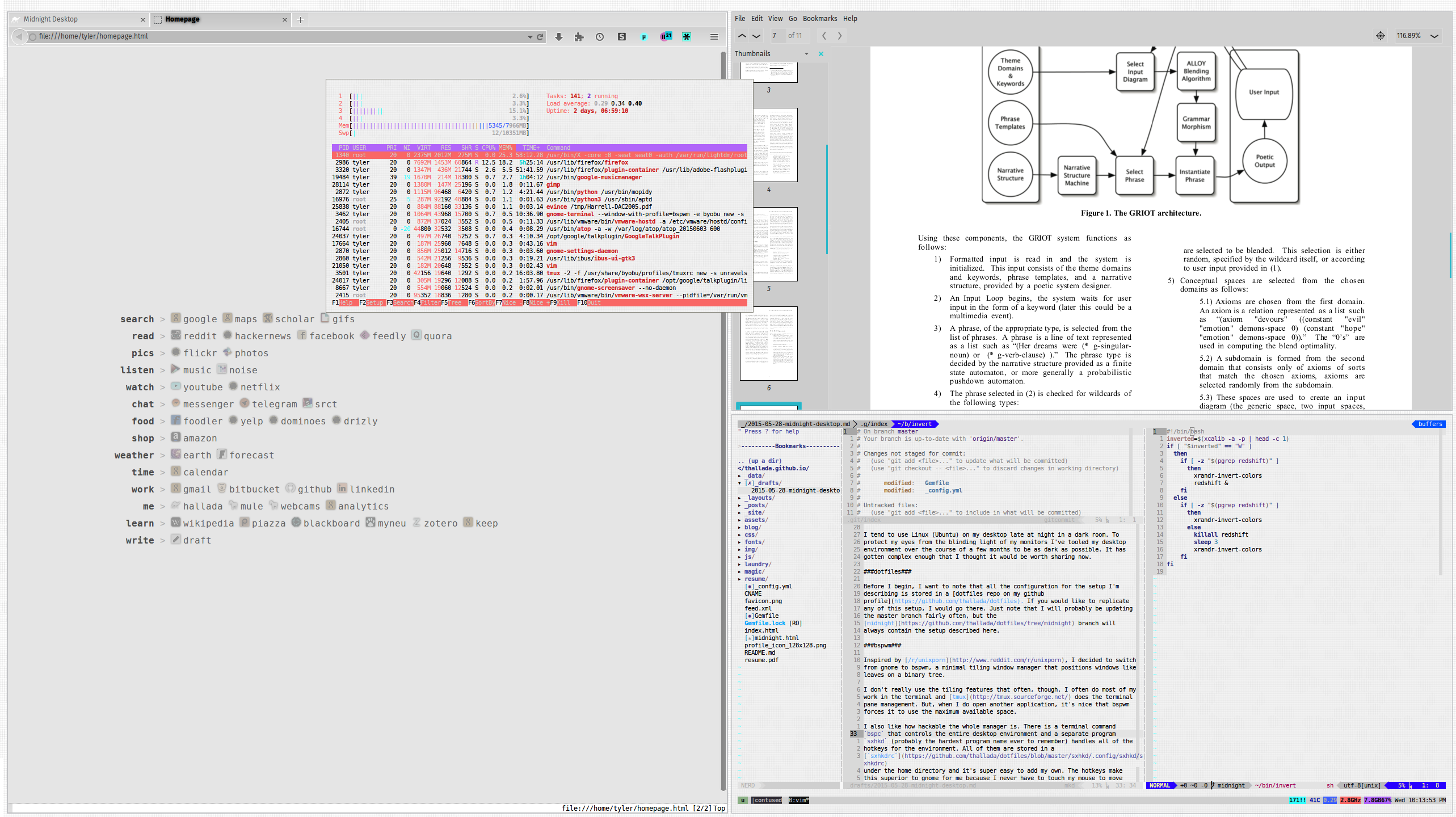