In this post, I will demonstrate how to generate random text using a few lines of standard python and then progressively refine the output until it looks poem-like.

If you would like to follow along with this post and run the code snippets yourself, you can clone my NLP repository and run the Jupyter notebook.

You might not realize it, but you probably use an app everyday that can generate random text that sounds like you: your phone keyboard. 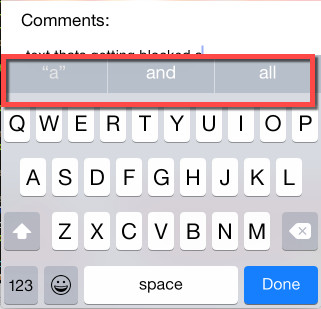 Just by tapping the next suggested word over and over, you can generate text. So how does it work?

First, we need a corpus: the text our generator will recombine into new sentences. In the case of your phone keyboard, this is all the text you’ve ever typed into your keyboard. For our example, let’s just start with one sentence:

Now we need to split this corpus into individual tokens that we can operate on. Since our objective is to eventually predict the next word from the previous word, we will want our tokens to be individual words. This process is called tokenization. The simplest way to tokenize a sentence into words is to split on spaces:

Now, we will want to create bigrams. A bigram is a pair of two words that are in the order they appear in the corpus. To create bigrams, we will iterate through the list of the words with two indices, one of which is offset by one:

How do we use the bigrams to predict the next word given the first word?

Return every second element where the first element matches the condition:

We have now found all of the possible words that can follow the condition “the” according to our corpus: “quick” and “lazy”.

Either “quick” or “lazy” could be the next word.

We can partition our corpus into groups of threes too:

Or, the condition can be two words (condition = 'the lazy'):

These are called trigrams.

We can partition any N number of words together as n-grams.

But, in order to predict the next word, what we really want to compute is what is the most likely next word out of all of the possible next words. In other words, find the word that occurred the most often after the condition in the corpus.

We can use a Conditional Frequency Distribution (CFD) to figure that out! A CFD can tell us: given a condition, what is likelihood of each possible outcome.

This is an example of a CFD with two conditions, displayed in table form. It is counting words appearing in a text collection (source: nltk.org).

Let’s change up our corpus a little to better demonstrate the CFD:

Now, let’s build the CFD. I use defaultdicts to avoid having to initialize every new dict.

So, what’s the most likely word to follow 'the'?

Whole sentences can be the conditions and values too. Which is basically the way cleverbot works. 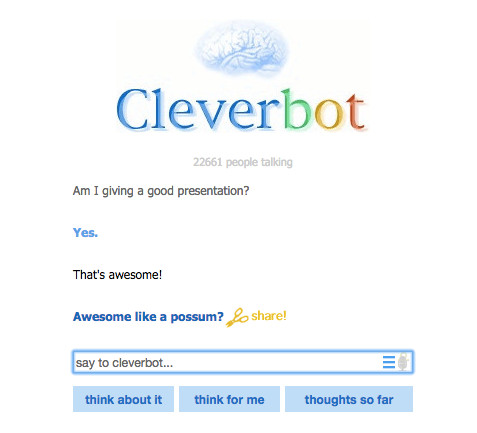 Lets put this all together, and with a little help from nltk generate some random text.

Great! This is basically what the phone keyboard suggestions are doing. Now how do we take this to the next level and generate text that looks like a poem?

Generating random poems is accomplished by limiting the choice of the next word by some constraint:

English has a highly nonphonemic orthography, meaning that the letters often have no correspondence to the pronunciation. E.g.:

The vowels are spelled differently, yet they rhyme 1.

So if the spelling of the words is useless in telling us if two words rhyme, what can we use instead?

The IPA is an alphabet that can represent all varieties of human pronunciation.

How can we determine the number of syllables in a word? Let’s consider the two words “poet” and “does”:

The vowels in these two words are written the same, but are pronounced differently with a different number of syllables.

Can the IPA tell us the number of syllables in a word too?

Not really… We cannot easily identify the number of syllables from those transcriptions. Sometimes the transcriber denotes syllable breaks with a . or a ', but sometimes they don’t.

The Arpabet is a phonetic alphabet developed by ARPA in the 70s that:

This is perfect! Because of that third bullet, a word’s syllable count equals the number of digits in the Arpabet encoding.

A large open source dictionary of English words to North American pronunciations in Arpanet encoding. Conveniently, it is also in NLTK…

To see this in action, try out a haiku generator I created that uses Buzzfeed article titles as a corpus. It does not incorporate rhyming, it just counts the syllables to make sure it’s 5-7-5. You can view the full code here. 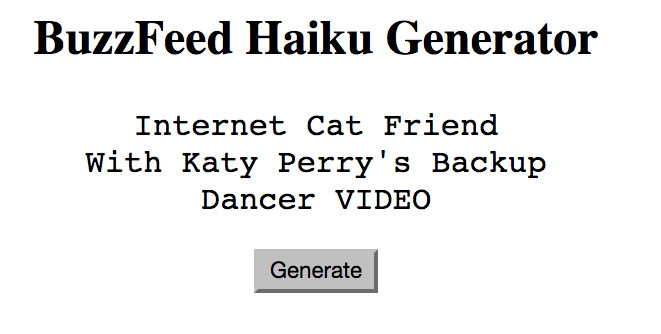 Run it live at: http://mule.hallada.net/nlp/buzzfeed-haiku-generator/ 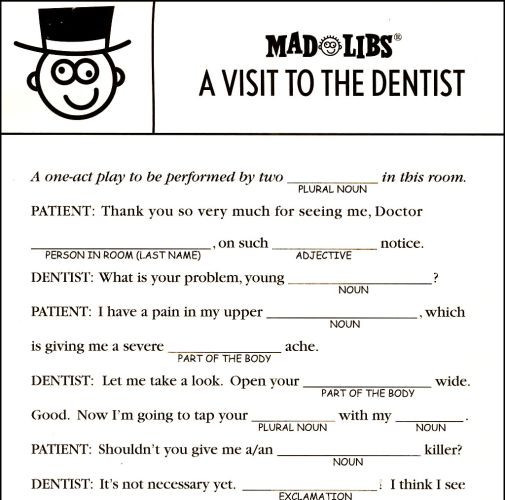 Mad Libs worked so well because they forced the random words (chosen by the players) to fit into the syntactical structure and parts-of-speech of an existing sentence.

You end up with syntactically correct sentences that are semantically random. We can do the same thing!

NLTK can parse any sentence into a syntax tree. We can utilize this syntax tree during poetry generation.

Syntax tree output as an s-expression:

And the same tree visually pretty printed in ASCII:

NLTK also performs part-of-speech tagging on the input sentence and outputs the tag at each node in the tree. Here’s what each of those mean:

Now, let’s use this information to swap matching syntax sub-trees between two corpora (source for the generate function).

The result can sometimes be amusing, but more often than not, this approach doesn’t fare much better than the n-gram based generation.

I’m only beginning to experiment with the spaCy Python library, but I like it a lot. For one, it is much, much faster than NLTK:

The API takes a little getting used to coming from NLTK. It doesn’t seem to have any sort of out-of-the-box solution to printing out syntax trees like above, but it does do part-of-speech tagging and dependency relation mapping which should accomplish about the same. You can see both of these visually with displaCy.

If you haven’t heard all the buzz about neural networks, they are a particular technique for machine learning that’s inspired by our understanding of the human brain. They are structured into layers of nodes which have connections to other nodes in other layers of the network. These connections have weights which each node multiplies by the corresponding input and enters into a particular activation function to output a single number. The optimal weights for solving a particular problem with the network are learned by training the network using backpropagation to perform gradient descent on a particular cost function that tries to balance getting the correct answer while also generalizing the network enough to perform well on data the network hasn’t seen before.

Long short-term memory (LSTM) is a type of recurrent neural network (RNN) (a network with cycles) that can remember previous values for a short or long period of time. This property makes them remarkably effective at a multitude of tasks, one of which is predicting text that will follow a given sequence. We can use this to continually generate text by inputting a seed, appending the generated output to the end of the seed, removing the first element from the beginning of the seed, and then inputting the seed again, following the same process until we’ve generated enough text from the network (paper on using RNNs to generate text).

Luckily, a lot of smart people have done most of the legwork so you can just download their neural network architecture and train it yourself. There’s char-rnn which has some really exciting results for generating texts (e.g. fake Shakespeare). There’s also word-rnn which is a modified version of char-rnn that operates on words as a unit instead of characters. Follow my last blog post on how to install TensorFlow on Ubuntu 16.04 and you’ll be almost ready to run a TensorFlow port of word-rnn: word-rnn-tensorflow.

I plan on playing around with NNs a lot more to see what kind of poetry-looking text I can generate from them.