This is a blog post that I originally wrote for the edX engineering blog.

At the core of edX is the edx-platform, a monolithic Django code-base 2.7 times the size of Django itself.

35% of the edx-platform is JavaScript. While it has served edX well since its inception in 2012, reaching over 11 million learners in thousands of courses on edX.org and many more millions on all of the Open edX instances across the world, it is starting to show its age. Most of it comes in the form of Backbone.js apps loaded by RequireJS in Django Mako templates, with jQuery peppered throughout.

Many valiant efforts are underway to modernize the frontend of edx-platform including replacing RequireJS with Webpack, Backbone.js with React, and ES5 JavaScript and CoffeeScript with ES6 JavaScript. Many of these efforts were covered in detail at the last Open edX conference and in Open edX Proposal 11: Front End Technology Standards. However, the size and complexity of the edx-platform means that these kind of efforts are hard to prioritize, and, in the meantime, frontend developers are forced to wait over 10 minutes for our home-grown asset pipeline to build before they can view changes.

There have also been efforts to incrementally modularize and extract parts of the edx-platform into separate python packages that could be installed as Django apps, or even as separately deployed microservices. This allows developers to work independently from the rest of the organization inside of a repository that they own, manage, and is small enough that they could feasibly understand it entirely.

When my team was tasked with improving the user experience of pages in Studio, the tool that course authors use to create course content, we opted to take a similar architectural approach with the frontend and create a new repository where we could develop new pages in isolation and then integrate them back into the edx-platform as a plugin. We named this new independent repository studio-frontend. With this approach, our team owns the entire studio-frontend code-base and can make the best architectural changes required for its features without having to consult with and contend with all of the other teams at edX that contribute to the edx-platform. Developers of studio-frontend can also avoid the platform’s slow asset pipeline by doing all development within the studio-frontend repository and then later integrating the changes into platform.

When edX recently started to conform our platform to the Web Content Accessibility Guidelines 2.0 AA (WCAG 2.0 AA), we faced many challenges in retrofitting our existing frontend code to be accessible. Rebuilding Studio pages from scratch in studio-frontend allows us to not only follow the latest industry standards for building robust and performant frontend applications, but to also build with accessibility in mind from the beginning.

The Javascript community has made great strides recently to address accessibility issues in modern web apps. However, we had trouble finding an open-source React component library that fully conformed to WCAG 2.0 AA and met all of edX’s needs, so we decided to build our own: Paragon.

Paragon is a library of building-block components like buttons, inputs, icons, and tables which were built from scratch in React to be accessible. The components are styled using the Open edX theme of Bootstrap v4 (edX’s decision to adopt Bootstrap is covered in OEP-16). Users of Paragon may also choose to use the themeable unstyled target and provide their own Bootstrap theme. 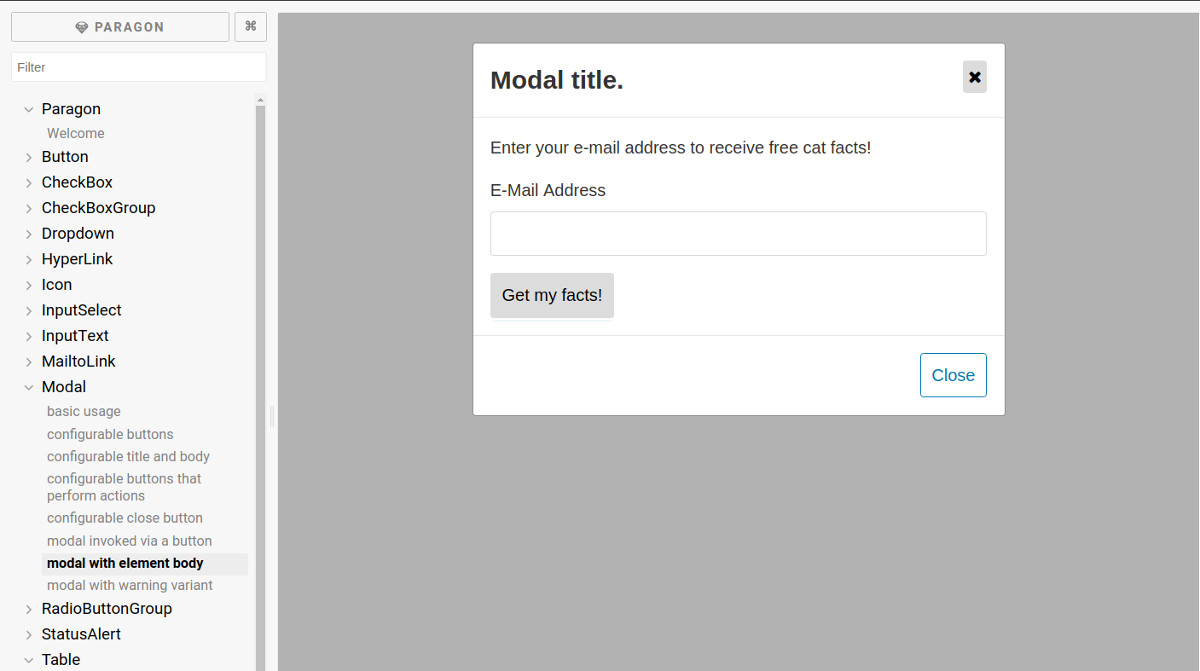 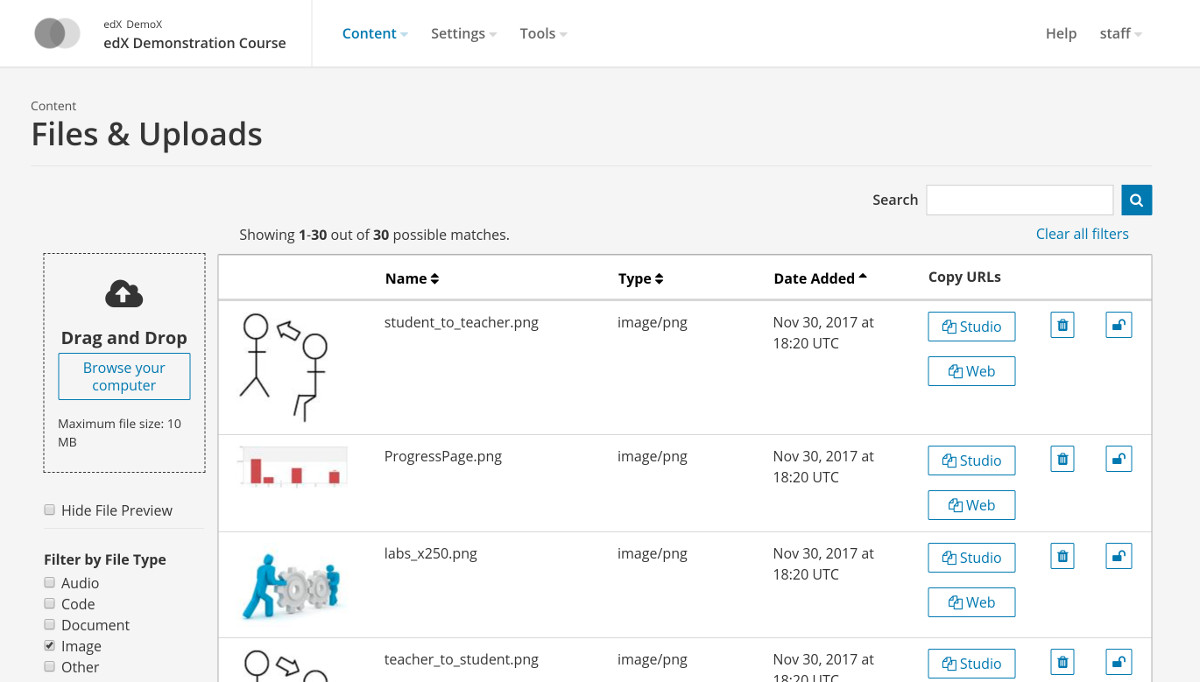 We were able to follow the typical best practices for developing a React/Redux application inside studio-frontend, but at the end of the day, we still had to somehow get our components inside of existing Studio pages and this is where most of the challenges arose.

Instead, studio-frontend handles building the development and production Webpack builds itself. In development mode, the incremental rebuild that happens automatically when a file is changed takes under a second. The production JavaScript and CSS bundles, which take about 25 seconds to build, are published with every new release to NPM. The edx-platform npm installs studio-frontend and then copies the built production files from node_modules into its Django static files directory where the rest of the asset pipeline will pick it up. 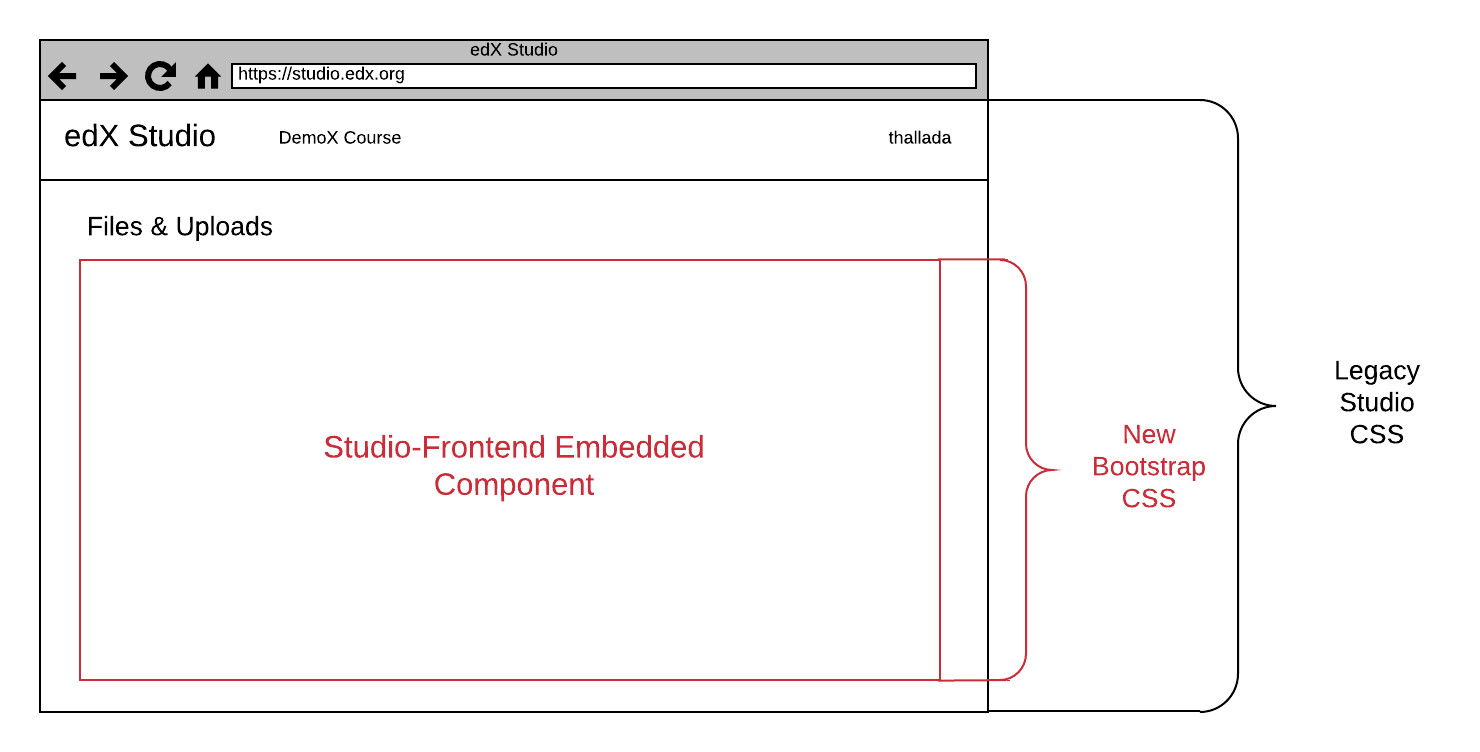 We were able to prevent styles leaking outside of the studio-frontend component by scoping all CSS to only the div that wraps the component. Thanks to the Webpack postcss-loader and the postcss-prepend-selector we were able to automatically scope all of our CSS selectors to that div in our build process.

Preventing the Studio styles from affecting our studio-frontend component was a much harder problem because it means avoiding the inherently cascading nature of CSS. A common solution to this issue is to place the 3rd-party component inside of an iframe element, which essentially creates a completely separate sub-page where both CSS and JavaScript are isolated from the containing page. Because iframes introduce many other performance and styling issues, we wanted to find a different solution to isolating CSS.

The CSS style all: initial allows resetting all properties on an element to their initial values as defined in the CSS spec. Placing this style under a wildcard selector in studio-frontend allowed us to reset all inherited props from the legacy Studio styles without having to enumerate them all by hand.

While this CSS property doesn’t have broad browser support yet, we were able to polyfill it thanks to postcss with the postcss-initial plugin.

From there, Bootstrap’s reboot normalizes the browser-specific styling to a common baseline and then applies the Bootstrap styles conflict-free from the surrounding CSS cascade.

There’s a candidate recommendation in CSS for a contains property, which will “allow strong, predictable isolation of a subtree from the rest of the page”. I hope that it will provide a much more elegant solution to this problem once browsers support it.

We opted for the latter because it kept the content close to the code that used it. Every display string in a component is stored in a displayMessages.jsx file and then imported and referenced by an id within the component. A periodic job extracts these strings from the project, pushes them up to our translations service Transifex, and pulls any new translations to store them in our NPM package.

Because Transifex’s KEYVALUEJSON file format does not allow for including comments in the strings for translation, Eric created a library called reactifex that will send the comments in separate API calls.

Studio includes the user’s language in the context that it sends a studio-frontend component for initialization. Using this, the component can display the message for that language if it exists. If it does not, then it will display the original message in English and wrap it in a span with lang="en" as an attribute so that screen-readers know to read it in English even if their default is some other language.

Read more about studio-frontend’s internationalization process in the documentation that Eric wrote.

To normalize the development environment across the whole studio-frontend team, development is done in a Docker container. This is a minimal Ubuntu 16.04 container with specific version of Node 8 installed and its only purpose is to run Webpack. This follows the pattern established in OEP-5: Pre-built Development Environments for running a single Docker container per process that developers can easily start without installing dependencies.

Similar to edX’s devstack there is a Makefile with commands to start and stop the docker container. The docker container then immediately runs npm run start, which runs Webpack with the webpack-dev-server. The webpack-dev-server is a node server that serves assets built by Webpack. Studio-frontend’s Webpack config makes this server available to the developer’s host machine at http://localhost:18011.

With hot-reload enabled, developers can now visit that URL in their browser, edit source files in studio-frontend, and then see changes reflected instantly in their browser once Webpack finishes its incremental rebuild.

The webpack-dev-server can now proxy all requests to Studio API endpoints (like http://localhost:18011/assets) to http://edx.devstack.studio:18010/.

Since studio-frontend components will be embedded inside of an existing Studio page shell, it’s often useful to develop on studio-frontend containers inside of this set-up. This can be done by setting a variable in the devstack’s cms/envs/private.py: 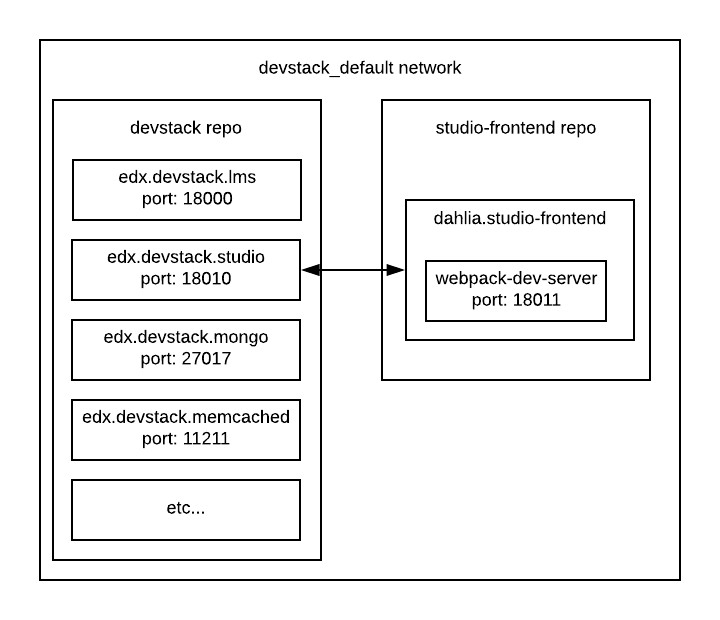 Instead of “bringing the new into the old”, we’d eventually like to move to a model where we “work in the new and bring in the old if necessary”. We could host studio-frontend statically on a completely separate server which talks to Studio via a REST (or GraphQL) API. This approach would eliminate the complexity around CSS isolation and bring big performance wins for our users, but it would require us to rewrite more of Studio.