I’ve been trying to learn Rust lately, the hot new systems programming language. One of the projects I wanted to tackle with the speed of Rust was generating 3D polyhedron shapes. Specifically, I wanted to implement something like the Three.js IcosahedronGeometry in Rust. If you try to generate icosahedrons in Three.js over any detail level over 5 the whole browser will slow to a crawl. I think we can do better in Rust!

Furthermore, I wanted to generate a hexsphere: a sphere composed of hexagon faces and 12 pentagon faces, otherwise known as a truncated icosahedron or the Goldberg polyhedron. The shape would be ideal for a game since (almost) every tile would have the same area and six sides to defend or attack from. There’s a few Javascript projects for generating hexspheres. Most of them generate the shape by starting with a subdivided icosahedron and then truncating the sides into hexagons. Though, there exist other methods for generating the hexsphere shape.

Play around with all of these shapes in your browser at: https://www.hallada.net/planet/.

So, how would we go about generating a hexsphere from scratch?

To start our sculpture, we need our ball of clay. The most basic shape that we start with can be defined by its 20 triangle faces and 12 vertices: the regular icosahedron. If you’ve ever played Dungeons and Dragons, this is the 20-sided die.

To define this basic shape in Rust, we first need to define a few structs. The most basic unit we need is a 3D vector which describes a single point in 3D space with a X, Y, and Z float values. I could have defined this myself, but to avoid having to implement a bunch of vector operations (like add, subtract, multiply, etc.) I chose to import Vector3 from the cgmath crate.

The next struct we need is Triangle. This will define a face between three vertices:

We use usize for the three points of the triangle because they are indices into a Vec of Vector3s.

To keep these all together, I’ll define a Polyhedron struct:

With this, we can define the regular icosahedron:

There’s an amazing library in Rust called serde that will make this very straightforward. We just need to import it and impl Serialize for all of our structs.

The JSON structure we want will look like this. This is what Three.js expects when initializing BufferGeometry.

For the "cells" array, we’ll need to serialize Triangle into an array of 3 integer arrays:

I had some trouble serializing the cgmath::Vector3 to an array, so I made my own type that wrapped Vector3 that could be serialized to an array of 3 floats.

And now Polyhedron needs to use this new type and implement Serialize for the whole shape to get serialized:

The actual serialization is done with:

On the JS side, the .json file can be read and simply fed into either Three.js or regl to be rendered in WebGL (more on that later). 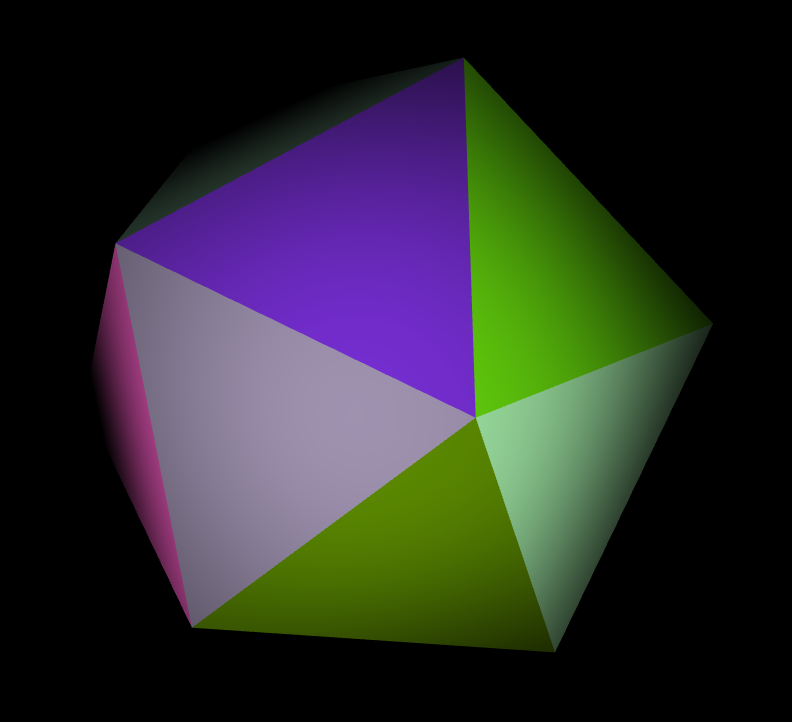 Now, we need to take our regular icosahedron and subdivide its faces N number of times to generate an icosahedron with a detail level of N.

I pretty much copied must of the subdividing code from Three.js directly into Rust.

I won’t bore you with the details here, you can find the function here. 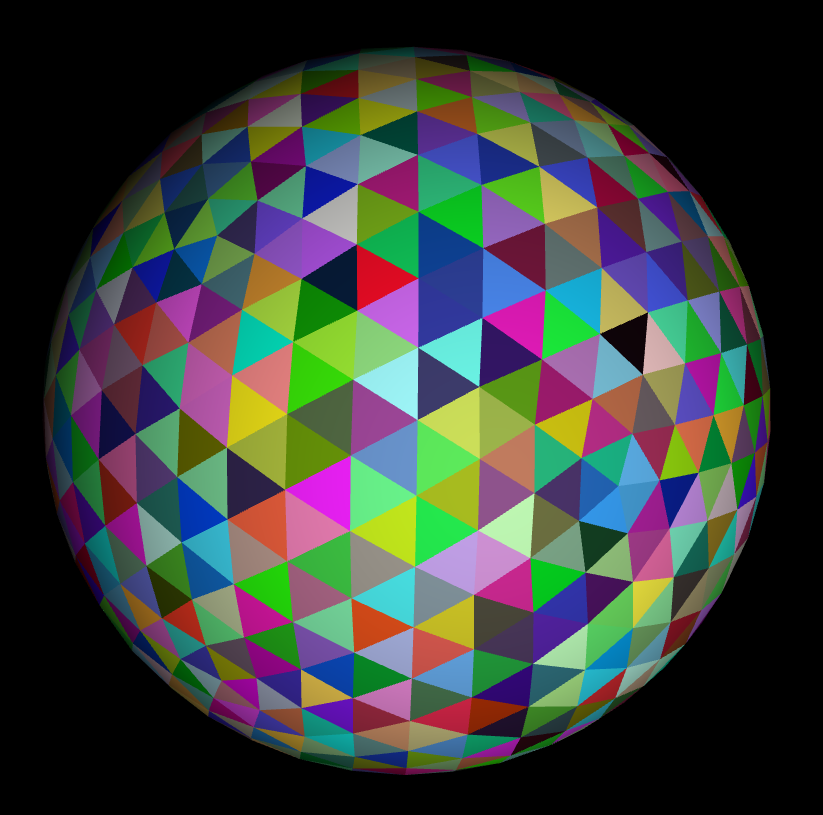 You can imagine this operation as literally cutting off the points of the subdivided icosahedron at exactly the midpoint between the point and it’s six or five neighboring points. 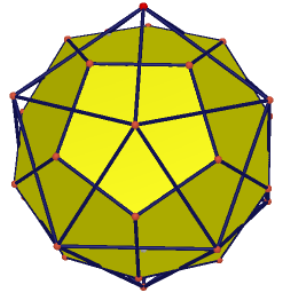 In this image you can see the regular icosahedron (0 subdivisions) in wireframe with a yellow shape underneath which is the result of all 12 points truncated to 12 pentagon faces, in other words: the regular dodecahedron.

There are many different algorithms you could use to generate the truncated shape, but this is roughly what I came up with: 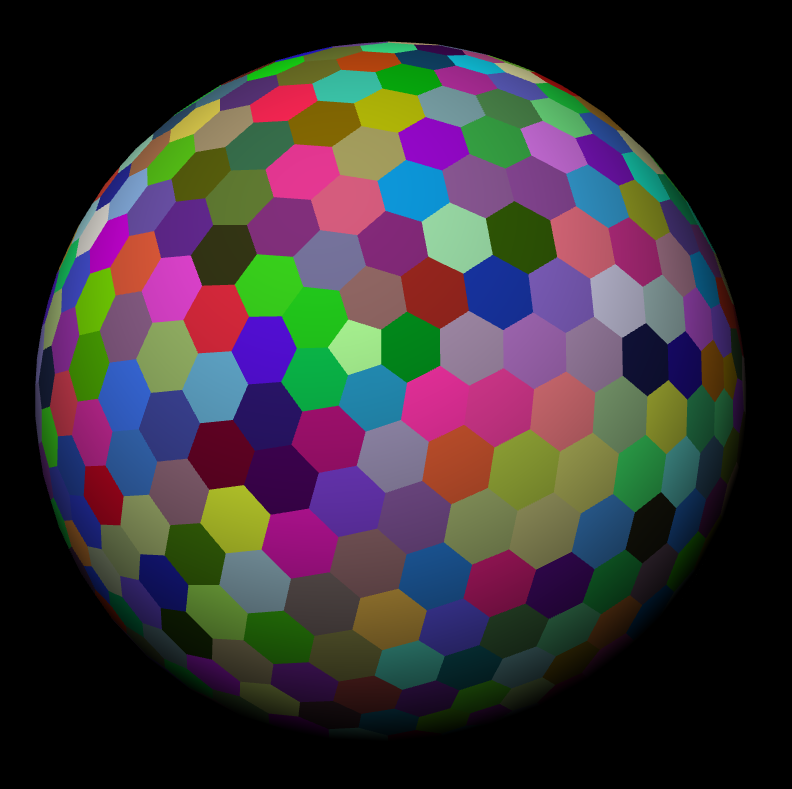 The truncate function calls out to a bunch of other functions, so here’s a link to the function within the context of the whole file.

It took me a surprisingly long time to figure out how to compute normals for the truncated icosahedron. I tried just using an out-of-the-box solution like angle-normals which could supposedly calculate the normal vectors for you, but they came out all wrong. 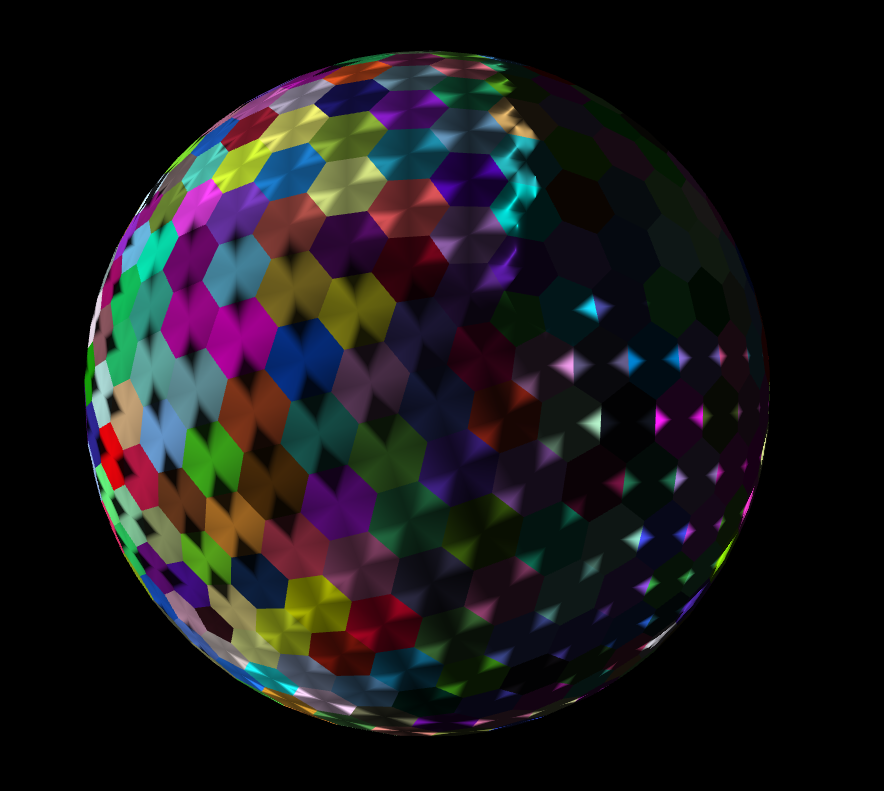 So, I tried doing it myself. Most tutorials on computing normal vectors for a mesh assume that it is tiled in a particular way. But, my algorithm spins around icosahedron points in all different directions, and so the triangle points are not uniformly in clockwise or counter-clockwise order.

I could have sorted these points into the correct order, but I found it easier to instead just detect when the normal was pointing the wrong way and just invert it.

Finally, all that’s left to generate is the face colors. The only way I could figure out how to individually color a shape’s faces in WebGL was to pass a color per vertex. The issue with this is that each vertex of the generated shapes could be shared between many different faces.

How can we solve this? At the cost of memory, we can just duplicate a vertex every time it’s used by a different triangle. That way no vertex is shared.

This can be done after a shape has been generated with shared vertices.

With unique vertices, we can now generate a random color per face with the rand crate.

Now that we have to duplicate vertices for individual face colors, the size of our JSON outputs are getting quite big:

Since all of our data is just floating point numbers, we could reduce the size of the output considerably by using a binary format instead.

I used the byteorder crate to write out all of the Vecs in my Polyhedron struct to a binary file in little-endian order.

The binary format is laid out as:

The write_to_binary_file function which does all that is here.

On the JavaScript side, the binary files can be read into Float32Arrays like this:

Rendering in WebGL with Regl

I was initially rendering the shapes with Three.js but switched to regl because it seemed like a more direct abstraction over WebGL. It makes setting up a WebGL renderer incredibly easy compared to all of the dozens cryptic function calls you’d have to otherwise use.

This is pretty much all of the rendering code using regl in my 3D hexsphere and icosahedron viewer project.

I also imported regl-camera which handled all of the complex viewport code for me.

It was fairly easy to get a simple renderer working quickly in regl, but I couldn’t find many examples of more complex projects using regl. Unfortunately, the project looks a bit unmaintained these days as well. If I’m going to continue with rendering in WebGL, I think I will try out Babylon.js instead.

Since rust can be compiled down to wasm and then run in the browser, I briefly tried getting the project to run completely in the browser.

The wasm-pack tool made it pretty easy to get started. My main struggle was figuring out an efficient way to get the megabytes of generated shape data into the JavaScript context so it could be rendered in WebGL.

The best I could come up with was to export all of my structs into flat Vec<f32>s and then create Float32Arrays from the JS side that are views into wasm’s memory.

And then the wasm lib.rs:

With wasm-pack, I could import the wasm package, run the shape_data() function, and then read the contents as any other normal JS array.

I could side-step the issue of transferring data from Rust to JavaScript entirely by programming literally everything in WebAssembly. But the bindings from rust wasm to the WebGL API are still way too complicated compared to just using regl. Plus, I’d have to implement my own camera from scratch.

So how much faster is Rust than JavaScript in generating icosahedrons and hexspheres?

Here’s how long it took with generating shapes in JS with Three.js in Firefox versus in native Rust with a i5-2500K 3.3 GHz CPU.